The Fiji Times » Ram’s passion shines through in his work 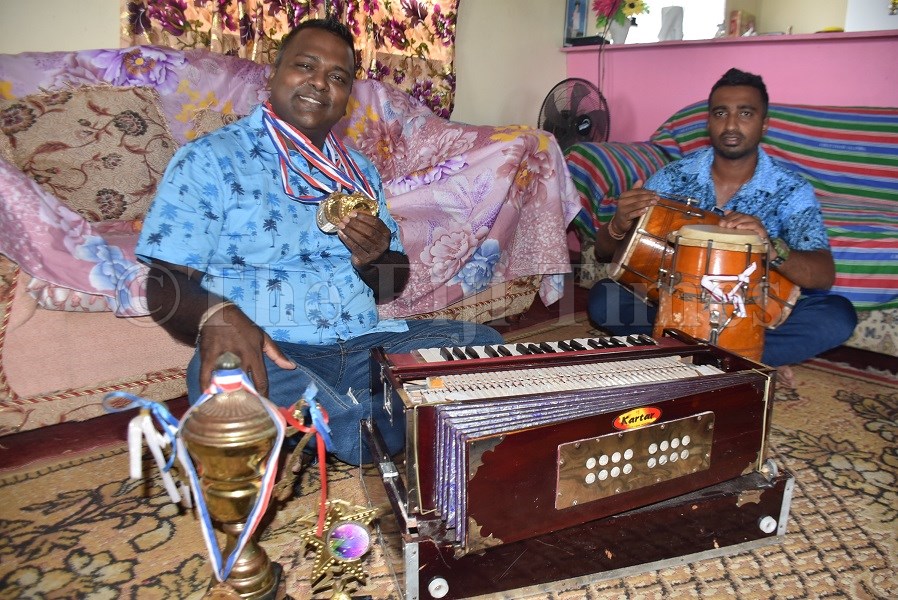 The Fiji Times » Ram’s passion shines through in his work

Singing lokgeets is a passion for Avinesh Rohit Ram. Today, he passes on his know-how to children.

Lokgeets are Indian folk songs sung on various occasions, although in Fiji they are mainly sung at wedding ceremonies.

For Ram, his passion runs so deep that he passes on his skills to the youth of his Navua community.

Ram, Process Administrator at Goodman Fielder International (Fiji) Pte Ltd and also known as Fiji One in his neighborhood, moved from Wainiyabia village to Shirinagar in 2016 and formed his own Ramayan mandali to promote his culture.

“I sing kirtans, bhajans and lokgeets, but my passion and interests are mainly lokgeets,” says Ram.

“I was 11 years old when I started singing but I sang on stage for the first time in 1997 at Rampur College. In this competition, I won first prize in the under 15 category. It was my first big achievement.”

Ram started singing kirtans in 1998 and a year later took up singing bhajans after developing his interest during religious programs at Wainiyabia Navyuwak Ramayan Bhajan Mandali.

“A lot of kids went through these programs and I was one of them,” Ram recalls.

“There, I started to learn. I was good at Hindi so I was chosen to recite the Ramayan occasionally with other members.

A year later, Ram became a pracharak – a preacher – of the mandali while continuing to nurture his musical interests. In 2016 he moved to Shirinagar where he created his own mandali – the Kartaar Navyuwak Ramayan Mandali.

“There are 15 children in my mandali and I teach them to sing and play instruments like the harmonium and the dholak,” he says.

“On Thursdays there are lessons at my house for the children as well as for anyone interested. Some of them are teachers and experts, but I’m really proud of the children who play the harmonium and the dholak so well – I’m very proud of them.

Ram’s career as a musician saw him participate in many stage performances and competitions right from elementary school.

“My family members, teachers and friends were proud of me and continued to inspire me after winning the Rampur College competition.

“My older brother, Rajinesh Rohit Ram, encouraged me to continue singing. In fact, he was the one who brought me on stage to sing.

“Since then, I have never looked back.”
Ram adds that his Ramayan mandali
also played a big role in the development
his talent.

“There were no singers in my family, so I had to learn on my own.

“This talent developed automatically when I started attending my mandala as a child.

“I clearly remember that in Wainiyabia, the annual Ram Navami program was held at my house. The songs and the sounds of the instruments just filled my heart, and now they are in my hands and my voice. I keep practicing and learning new tunes as I go and thanks to this I have now reached a stage where I can teach people.

Like all musicians, Ram also has his heroes and fellow practitioners of the art whom he admires and currently considers the famous singer Navua Nitesh Bhaiya Prasad as his inspiration and guru.

“So far, I’m very inspired by Nitesh. He is only two years older than me and we went to school together.

“We both recited the Ramayan in school and now he is a very respectable figure in Navua. He is also very knowledgeable and I consider him my guru in my singing journey.

Ram performs for hire with his own band although his main focus is teaching young people.

“I am now a well-known singer in Navua and have sung all around Viti Levu. People hire me to sing lokgeets at weddings and other functions and I sing bhajans at funeral rituals.

“But my focus now is on the young people of Navua. I want to teach as many of them as possible, especially to play musical instruments.

Ram is also focused on his immediate plan which is to release his first lokgeet album.

“All lokgeets on the album will be my own composition and that’s my major plan,” he says, adding that his compositions would be based on the latest tracks.

“Older artists sang from the books while singers nowadays compose their own songs and sing along to the latest tunes.”

Ram says culture is an identity and that’s a message he shares with young people.

“I ask all parents to continue to encourage their children. Don’t kill their talent. Let it grow, whatever field it is in.

“Let the children go out and socialize with children involved in religious programs.

“That way they can share their ideas, problems and skills.”