Experiences with modern agricultural techniques: the story of a progressive farmer from Kargil Er. Ahmad Ali 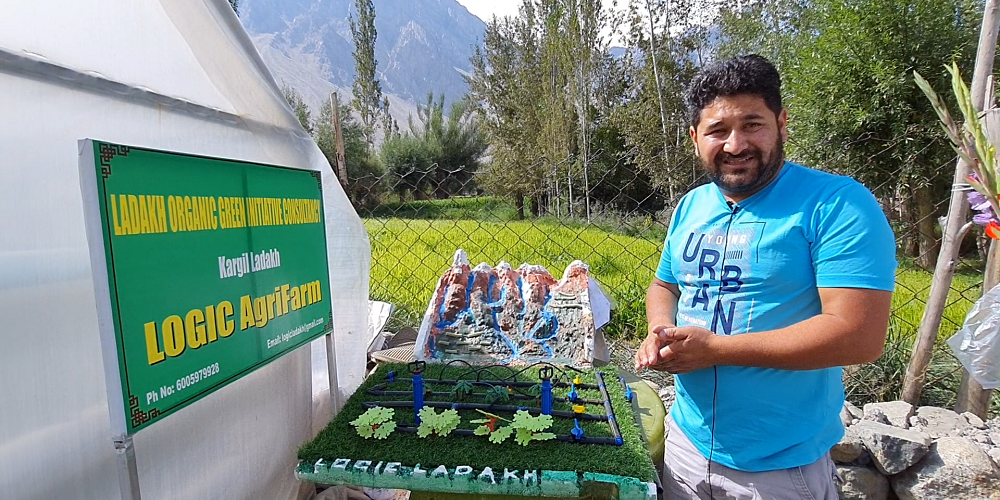 Experiences with modern agricultural techniques: the story of a progressive farmer from Kargil Er. Ahmad Ali

Uh. Ahmad Ali from Kanoor, who left a job offer as an assistant professor to become a farmer, is changing the lives of farmers in Ladakh. Adopting new techniques in agriculture like drip irrigation, mulching and hydroponics, Ahmad Ali instills hope in farmers to boost agricultural activities even in areas where irrigation water is scarce.

Agricultural development and agriculture are basic needs of human life. But now Leh and Kargil districts are abandoning agriculture, resulting in the importation of even the smallest thing,” Ahmad Ali said.

The importation and dependence of remote areas like Ladakh on the outside world was a concern for Ahmad Ali. How long would we depend on and import from outside? the question haunted the farmer. “I always had the vision to make Ladakh self-sufficient,” Ahmad Ali said.

He pursued a B. Tech with a major in agriculture because agricultural machinery and drip irrigation were not explored in Ladakh. Gradually, he developed an interest in this field and pursued M. Tech in Soil and Water Conservation which was completed during the COVID-19 pandemic. During the pandemic, he returned home and found himself isolated.

“I turned this isolation into an opportunity and tried to do something different. Hydroponics was my field of study and specialization which I carried out at home with materials available locally. happened to appear in an interview for an assistant professor position at a university. During a break during the interview, the interviewer discussed my hobbies and time during the pandemic. I told them talked about my hydroponic experiences that inspired them and selected me as an assistant professor and enjoyed my work.

“Their appreciation and encouragement boosted my confidence and pushed me to introduce the same throughout Ladakh. Thus, I decided not to accept the position of assistant professor,” said Ahmad Ali who prefers others to call him a farmer rather than an engineer.

Ahmad Ali began his life as a farmer with mulching experiences that were new to family members and villagers. The new experiment, if unsuccessful, was also a concern for family members. “Despite this, the family member supported me and allowed me to continue the experiment. Now I have 12-13,000 nursery stock that someone else might consider stupid but my parents supported,” Ahmad Ali said.

Regularly, in coordination with like-minded people in Baseej-e-Zaraat, he established the Rangyul Organic Producer Company Limited (ROPCL) which is an agricultural commodity organization that trains a group of farmers to supply national markets and international for their products. It functions as a bridge between farmers and sector agencies. Currently, ROPCL has more than 140 farmers associated with it.

The Baseej-e-Zaraat wa Baghbani, as an apex organization, coordinates the agencies and organizations and represents them at the higher level to the district and union territory administration.

Our group has formed the Farmers Produce Organisation, farms in different locations, entrepreneurs and farming groups at the village level in a very short period of a few years. I am very grateful to all who have supported me financially, technically and morally, especially the Department of Agriculture, Krishi Vigyan Kendra – Kargil, Baseej-e-Zaraat wa Baghbani, etc.

“We hope that in the future not only Ladakh but even outside Ladakh will benefit from these farms. we look forward to making Ladakh sustainable,” Ahmad Ali hoped.

Plus, it’s also a lesson in this particular drip irrigation technique for visitors to my farm.

Asked about other activities, Ahmad Ali said he and his team also conduct research in the field of agriculture. This year, they focused on floriculture yield. IHBT is a mission of UT administration to introduce floriculture in Ladakh. So, in coordination with the administration, they grew flowers in different places. Previously we used to send big shipment to Delhi, but now this gladiolus flower is popular in our local market. That’s why we aim to introduce the cultivation of flowers among the locals.

Talking about the decline of agriculture among the locals, he said that the population is increasing and the availability of land is less. So, we have to think about the irrigation of arid lands near our villages; “Area expansion must be a priority,” he insisted.

Moreover, bunching is also necessary because when we explored, we found that there are many machines like dryers, flash cooling machines and high pressure processing which are very expensive. It is hardly affordable for a small farmer. Thus, a cluster would help procure these machines. On a huge cluster, the government could also easily make expenditures that would be beneficial to the masses and easy for the government.

“Farmers should be proud and dignified. I like someone calling me a farmer instead of an engineer. If you eat your daily meals, it’s because of a farmer. If you are alive, it is also thanks to a farmer. I consider this to be a noble and lasting profession.

“Profit is not the main motive; agriculture is a sustainable and secure profession. But agriculture needs to be equipped with up-to-date and latest technology. Whatever your profession, you have to do agriculture in your free time which is relaxing and relieves stress,” Ahmad Ali concluded.